nendo designed the cabbage chair for XXI Century Man exhibition curated by Issey Miyake to commemorate the first anniversary of 21_21 Design Sight in Roppongi, Tokyo. Miyake asked us to make furniture out of the pleated paper that is produced in mass amounts during the process of making pleated fabric, and usually abandoned as an unwanted by-product.

Our solution to his challenge transformed a roll of pleated paper into a small chair that appears naturally as you peel away its outside layers, one layer at a time. Resins added during the original paper production process adds strength and the ability to remember forms, and the pleats themselves give the chair elasticity and a springy resilience, for an overall effect that looks almost rough, but gives the user a soft, comfortable seating experience. Since the production process is so simple, we thought that eventually, the chair could be shipped as one compact roll for the user to cut open and peel back at home.

The chair has no internal structure. It is not finished, and it is assembled without nails or screws. This primitive design responds gently to fabrication and distribution costs and environmental concerns, the kinds of issues that face our 21st century selves. Thus, the Cabbage Chair fits active, optimistic and forward-moving “21st century people”, the kind of people who, to borrow a concept Miyake expressed during a meeting with us, “don’t just wear clothes, but shed their skin”. 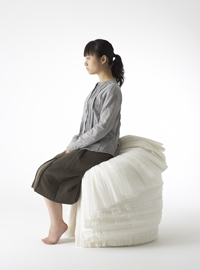 The Cord Chair, a collaboration with Hiroshima Prefecture manufacturer Maruni Wood Industry, has legs only 15 mm in diameter. Rather than assembling wood panels around 9mm steel frame, we decided to hollow out pieces of wood to clad each part of the frame. We were particularly interested in showing off the flawlessness of the wood material. Each of the chair’s parts is carved from wood, left simple and undecorated to bring out the flawlessness of the material. Since each part is only 3 mm wide, the chair must be made by hand, rather than with mass-production machinery. Each chair is carved by artisans who took special care to align the wood grain. The cord-chair is not about the kind of ‘mechanical beauty’ that seeks the least common multiple in form and structure. Rather, with the cord-chair, we wanted to explore the relationship between materials like the metal wiring within an electrical cord and the rubber that encases it. Like reinforced concrete, the chair separates and highlights the role of each element. It liberates wood from structure, allowing the material’s natural warmth and softness to come into sharp focus, and bringing out its greatest common denominator. 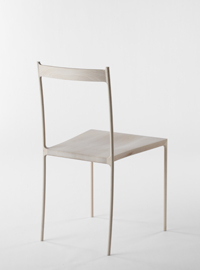 A collection of objects that combines the fine cut glass techniques special to Bohemian glass with ancient production method for sheet glass in which glass blown in a cylinder is cut away, opened up and flattened. We reheated a variety of objects already decorated with traditional cut glass patterns, then sliced them open and reattached them to each other to create one large object. As a manner of making, the process was like sewing together animal hides, or piecing together small fragments of cloth to create a great patchwork quilt. 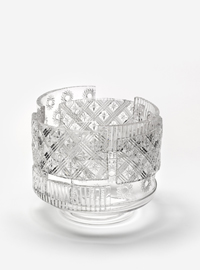 A collection of sculptural objects made by heat-forming agricultural nets ordinarily placed around fruit and vegetables to prevent them from harm by wind and animals. The nets are stronger than organdy but more flexible than wire mesh. Using them as a sculptural material allowed us to evade the traditional necessity of combining structure with a separate surface material, to create a thin membrane that stands independently, but also floats gently on a breeze. The flower vase and bowl wrap the air like a furoshiki Japanese wrapping cloth and the lamp softly emits light, in the manner of a traditional Japanese paper lantern.

The multiply-pleated table are reminiscent of the surface of Japanese shibori (tye-dying) textiles and hand-made paper. The action of gently wrapping something and close attention to the texture of the surface endow these objects with the very particular sense of expression found only in Japan, since ancient times. 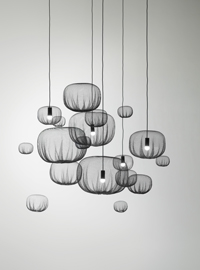 This lamp was formed by blowing glass into the form of an air bubble then sucking the air away. Ordinarily, glass is made by blowing air into the molten material. The inhale lamp, on the other hand, comes from the act of exhaling. It’s a form created by negative air pressure. 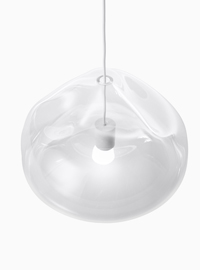 nendo created blown-fabric for Tokyo Fiber ’09 Senseware, an exhibition intended to convey the possibilities of new materials developed with Japanese synthetic fibre technology. ‘Smash’ is a specialized long-fibre non-woven polyester that can be manipulated into different forms through hot press forming technology. Because it is thermoplastic, light and rip-proof, but glows beautifully when light passes through it, we wanted to create lighting fixtures in the style of vernacular Japanese chochin paper lanterns with it. The structure of standard chochin consists of thin strips of bamboo wrapped around a wood frame and strengthened with vertical stitching. Japanese mulberry paper pasted over the frame completes the lamps, and gives them their characteristic glow. But we realized that Smash’s particular properties would allow us to shape it like blown glass into a seamless one-piece lantern. It is impossible to completely control the process, so each fixture takes a unique form as heat is added and pressurized air blown into it.

As in glass-blowing, we can intervene during the production of each piece, resulting in a collection of objects whose infinitely varied imperfections are reminiscent of the infinite formal mutations of viruses and bacteria in response to environmental changes, and a far cry from the standardized forms of industrial mass-production. The fixtures are weighted at the base by the light source. It is straightforward contrasts with the careful selection of materials. Smash changes form if the interior temperature rises above 80 degrees centigrade, so we mounted low-heat LED bulbs in machined aluminium sockets that double as a heat-sink to maintain a low interior temperature. 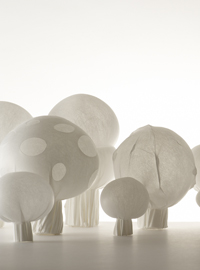 Nakagawa Mokkougei is a traditional Japanese cooper whose pails, barrels and other wooden items have long been beloved of exclusive Kyoto inns and restaurants. We applied their techniques to create a champagne cooler. We decided to keep some of the slats longer than the others to give users a sense of how buckets are made. While seemingly slight, this decision meant a complex production process: each cooler must be assembled once, then taken apart, its surfaces finished then reassembled. The walls of Japanese wooden buckets ordinarily lie straight. We added a slight curve at the base to create a soft feel both visually and in the hand. To soften the hoop’s metallic gleam, we sandblasted it to a matte texture then coloured it with a powdered paint, developing another new technique. The pieces are made from a combination of Japanese cypress (hinoki), the traditional material for buckets, and Jindai Cedar, a rare, darker wood uncovered from having been buried in the earth for more than 2000 years. We treated both woods with urethane to keep warping from ultraviolet rays, dirt and moisture to a minimum. A collection that combines old and new techniques to bring out the best in its materials. 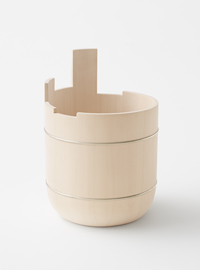 The National Taiwan Craft Research Institute is concerned with the revitalization and development of Taiwan’s traditional crafts skills and industries. We designed this collection as part of the Institute’s Yii series, a new project with art direction by Gijs Bakker, co-founder of Droog Design. Our task was to discover sources for new designs through research into Taiwan’s traditional bamboo handicrafts and furniture. We were fascinated by bamboo-working techniques, and decided to draw our inspiration for a chair from these, rather than to work with the material itself. We applied bamboo-working techniques to tubular steel pipes, which can be easily mass-produced with standard levels of quality. Borrowing bamboo handicraft techniques like weaving together thinly sliced sections and joining parts by wrapping them around each other allowed us to give the hard metal a sense of pliancy. The bamboo artisans visited the metal workshop regularly, and we had many conversations about the project and its capacities.

The bamboo-steel chair is the fruit of these conversations: a symbol of new futures for traditional crafts through the cross-fertilization of different techniques and materials. We also designed a table as the second round for the collection. We chose another technique in which a length of bamboo is sliced vertically into thinner lengths which are then woven together to create legs and a tabletop from a single piece, and applied this method to a steel pipe. The result is structural balance and a new design sensibility until now nonexistent in steel furniture. 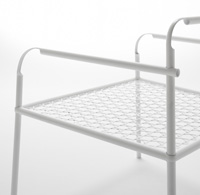 A chess set made with Harcourt glass, the stunning crystal introduced in 1841 by France’s storied Baccarat. Harcourt glassware and chess may seem to have nothing in common at first glance, but closer inspection reveals intriguing commonalities. Glassware invites two people to come together at a table to raise a glass in mutual enjoyment. And what is chess but two people coming together over a chessboard, picking up chess pieces and sharing the intensity of the moment? Based on this realisation, we created a chess set designed to bring the conviviality of a shared drink to playing chess. Instead of adding any new elements to Harcourt’s distinctive style, we isolated six distinct, different elements from the glassware’s overall pattern to represent the king’s crown, the hem of the queen’s robe, the bishop’s mitre and so on, and distinguished the different chess pieces this way. The pieces’ impression changes dramatically even from subtle variations in the position and angle of cuts, and we were happily startled at the beauty of all six pieces.

Our surprise was perhaps misplaced: the pieces are made from transparent and midnight blue crystal, and crystal’s multi-faceted nature makes it a talented actor, able to play all parts with convincing aplomb. The board’s crystal emphasises the transparency of the pieces, and a deep blue cross pattern on the board’s base glows through, bringing the chequerboard pattern to life. Of course, we also didn’t forget to add a dash of red, the distinctive accent of Baccarat. 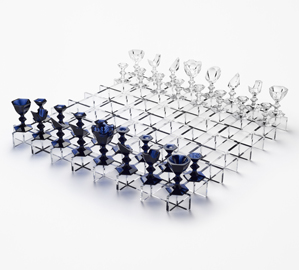 A pendant lamp made simply by rolling up two steel sheets from the same form. Soft light spilling out from the cracks between the two sheets complements the stronger light emitting from the open mouth, as though light itself has been rolled. Maki is the Japanese word for something that has been rolled. 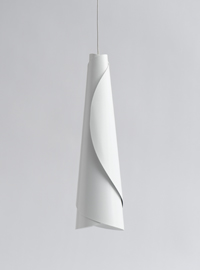