!Baas is in Town

In a conversation held during his visit to Design Museum Holon in preparation for the exhibition
Hide and Seek – Maarten Baas, the Dutch designer spoke of whether he defines himself as a designer or an artist and about his vision for the exhibition in Israel. Now Six months later, did we manage to fulfill his vision?
Shira Kimmel: Thank you for coming. It's very nice to have you here. How is your visit so far?

Maarten Baas: It's very nice. I like the museum, I was here in 2009 when it wasn't finished yet, and ever since I've been waiting for a moment to come back.

SK: Maybe you were not here since then, but your works have taken part in a number of exhibitions at the Museum. In our first exhibition The State of Things: Design and the 21st Century (2010), the exhibition New Olds (2011), and the exhibition
Post Fossil (2011) curated by Lidewij Edelkoort. The exhibition featured the "Future Fossils" in the field of design. How do you see your work representing contemporary times?

MB: I try to give my response on how I feel or what I see. In that sense, I hope it's always a relevant representation of the time. I think it's the magic of that good work can make, it connects to a lot of people at the same time, yet they have different interpretations of it.

When I exhibited Smoke (2002), it was really about burning what you have and kind of looking back and taking it a step further. I didn't really want to literally say something about 9/11, but somehow unconsciously that was what was in the minds of people, Smoke was a response to that in one way or the other. Then the Clay furniture in 2006 was kind of a new life, very primitive, very childish, it was the next step. It was also relevant to that moment in time, I think. 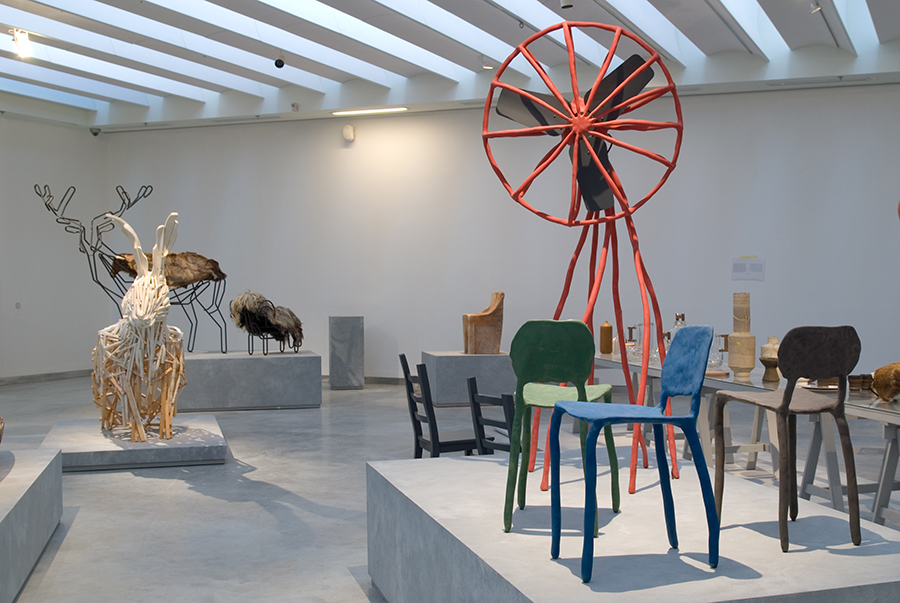 SK: Does the term "time" always affect your creative process?

MB: Not necessarily. I think it is always an intriguing subject because it is so abstract. Time is always there. You cannot avoid time but at the same time, you also want to capture it. That’s why my response to that is to make a clock which is actually made by a human being, so that not every minute is exactly the same as the others. It is always the perspective of a human being. Time is always continuing, we can't stop it. I like the effect of time, and I want to play with that and add question marks to how we look at things.In the series Smoke, for instance, I burn the pieces that you actually want to keep exactly how they are, especially design classics like the Gerrit Rietveld chair. You want it in your room. You want to keep it exactly like it is, as if time didn't exist and it could stay forever the way it was meant to be. I do the opposite, I actually burn it. Things go on, change over time and develop. We, as human beings, want to keep things as they are, that is our old natural habit.

The theme of time isn't always there, sometimes it's not so obvious. Since the clocks became quite known, it's also kind of a label which is put on me, “You make a lot of clocks, what is it with you and clocks?!' (laughs). Well, I also make other things, but that's less known. It's not that I am only thinking of clocks, but it's just the thing that comes to most people’s minds.

Adi Hamer: How can a museum, the Groninger Museum in this case, just let you burn iconic items from the collection?

MB: It was not an original Rietveld piece, but I guess it was a replica, an official replica.

AH: How did the burning process happen, when did you stop it?

MB: It's quite a coincidence what happens while the chair catches flame, and what the fire does, the eye control, it's kind of a game between me and the flames. I tried to stop the process at a moment I was satisfied with the outcome. 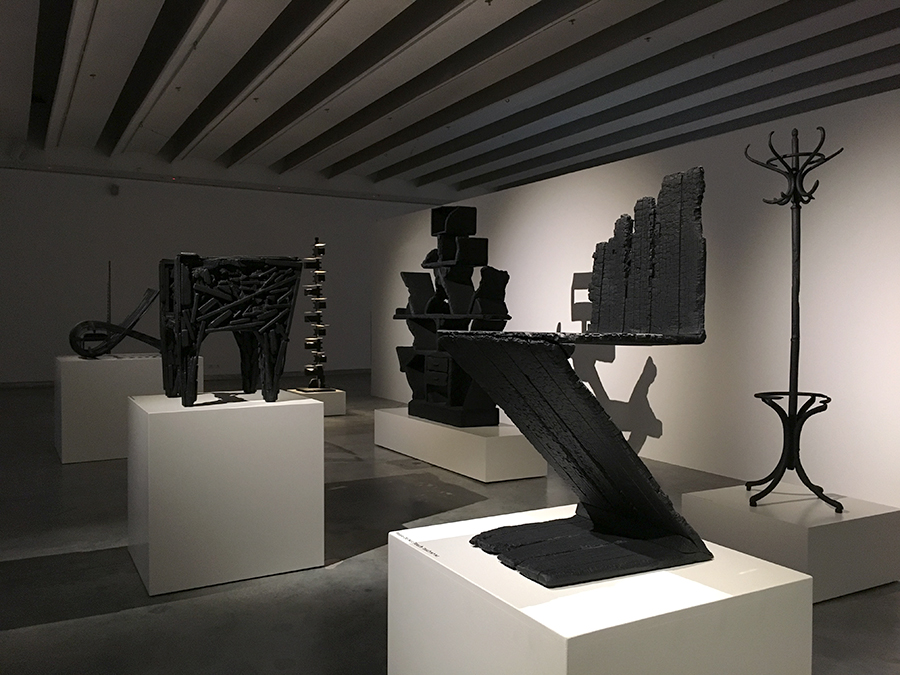 In front - Maarten Baas, Zig Zag Chair by Gerrit Rietveld, Where There is Smoke…, 2004.
From the exhibition "Hide and Seek - Maarten Baas", 2018, Photo: Shira KImmel

SK: It seems as if you go against trivial design and production methods in your work. How would you define yourself? Are you an artist? A designer?

MB: Well, the first thing I don't do with myself is defining something. I think that it's not good to do in any case, actually, to define which only words, for me it's not so valuable. I found that the best way of describing it is that, it means something very finished. It is just locking yourself in, and actually all my work is about finding what's next and breaking boundaries. If I will make my own boundaries by giving a definition to my job, than I could not work. Especially in the world which is related to art, I think there should not be any definition and that you should be open minded, and see how you could move forward.

Having said that, if you really want to talk in terms of art and design, there are artists who express themselves through painting, there are artists who express themselves through photographs, sculpture, dance, or theater, and I'm an artist who expresses himself through design, through functional objects. The way I think is much more comparable to typical artists than to typical designers. My challenge is more to tell a story, rather than to find a technical solution for a stackable chair, for instance.

AH: So maybe you are a "design researcher?"

AH: What did you study?

MB: According to my diploma, I am a designer. I studied in the Design Academy in Eindhoven, which used to be known as The Academy for Industrial Design. They changed the name while I was in school, but it had nothing to do with me (laughs). They didn't want to be associated with industrial design anymore. But I understand the question. Everyone wants to be able to put things into categories, but in the end, for me, the categories are not that relevant. 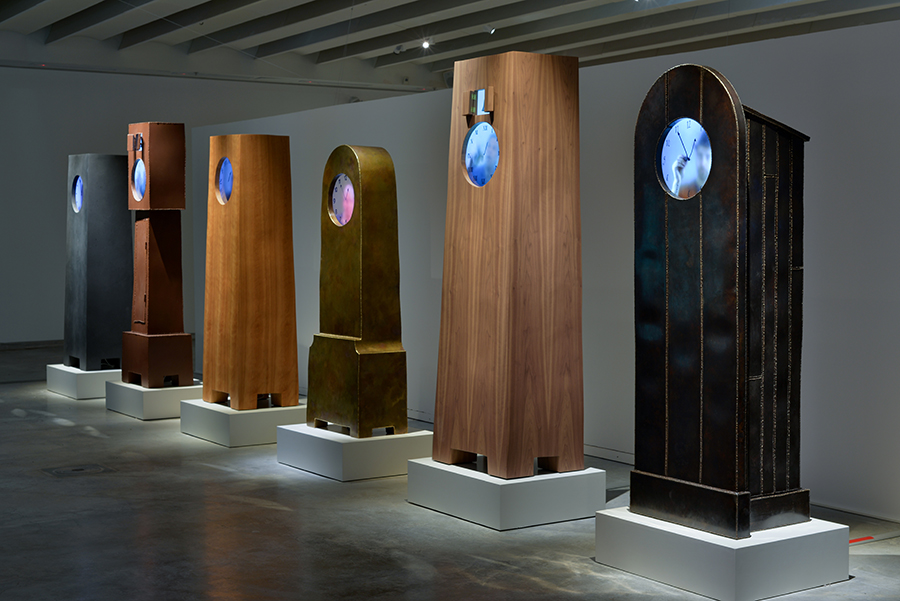 SK: Let's talk about your exhibition, why did you name it Hide and Seek?
MB: First of all, I like the fact that hide-and-seek is a children's game. I like the childhood and naivety, it is something which plays a role in all of my works. I also see my career as kind of playing. I play with the world around me and the expectations that I have for myself, or that others have of me, with the difference between art and design. When I made the clocks they were definitely defined as art because we had limited editions that were expensive, and they ended up in museums. So the next year I made a phone app, which was very cheap, unlimited and not in museums (laughs). The phone app was exactly of that clock, l like to play around with it.

Hide and Seek is because my work goes in quite extreme, different directions, ranging from very introverted to very extroverted. I also have not been presenting new collections in Milan for the past five or six years, I was kind of hidden away and at the same time I'm also always seeking the next step, and how I can do it. So hiding and seeking is my character and my way of working. 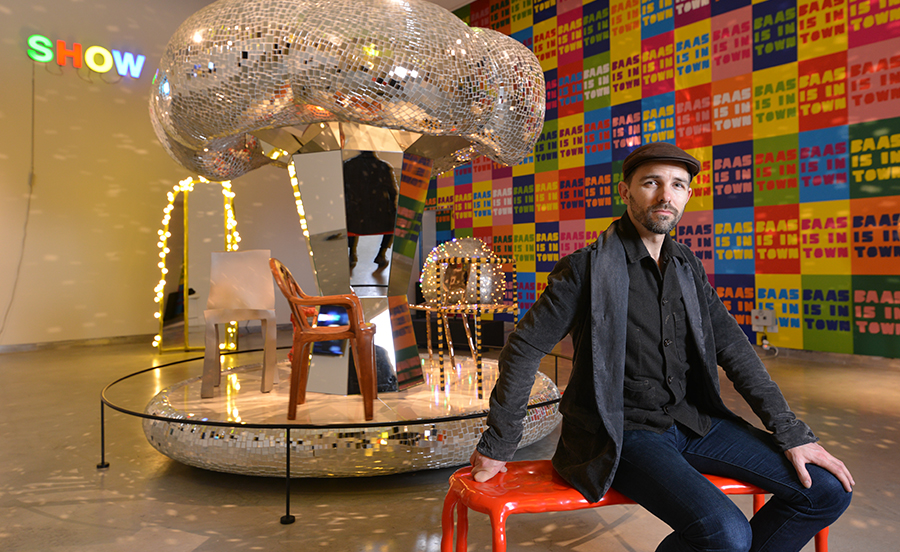 AH: How do you imagine the exhibition here after you've seen the galleries in Design Museum Holon?

MB: In Groninger Museum there were a lot of rooms, it went from one room to the next. You could go around in chronological order, from one theme to another, and somehow they made sense after each other. Like I said earlier, after Smoke, after everything was burnt, the new Clay furniture came up. What I liked in Groninger Museum was that there was a corridor with self-portrait videos of me, and those videos were all kind of the "hiding" part of Hide and Seek, they were representing the empty period. Like when I haven't been presenting in Milan for a couple of years, because I didn't feel like making new works. I felt like somehow that this void should be represented in an exhibition that offers an overview, because I think it’s a fake representation if you just jump from one project to the next, because you kind of deny the emptiness in between. So there are all sort of self-portrait videos in which I'm kind of waiting, in all sorts of ways. In one video I'm sleeping, in another one I'm dressed up like a professor, waiting for some experiment to happen, and in another one I'm just tapping my fingers like a bored office clerk, it represented this sort of emptiness.

Here I think it's different because there are two big rooms, so I'd rather split it into two extremes – introverted and extroverted, more contemplative works and more expressive works. But when I saw it now I felt like it's nice to have those videos again in the stairway between the two rooms, and then divide the more expressive things from the more silent things. I would put the circus (Baas is in Town) and the Clay furniture downstairs, and then go through the silent self-portrait videos in which I'm kind of staring around until something will happen. Upstairs there would be the clocks (Real Time), and the Smoke furniture and maybe also the whispering voices (May I Have Your Attention Please?), but it would be much quieter, and more related to time, so that you stand still and think. The lower gallery would be more entertaining. Also in terms of the volume of the sound, the circus has to go with circus music, and the other one has to be silent and quiet.

Of course this could change due to practical issues, because we don't know how big the crates are in relation to your elevators. So I don't know if my plan will happen as it's planned now. I like the museum very much.
I think the exhibition should work out nicely.

AH and SK: We are sure it will. Thank you very much Maarten.


*The exhibition Hide and Seek - Maarten Baas will be on display in Design Museum Holon
until April 27, 2019. 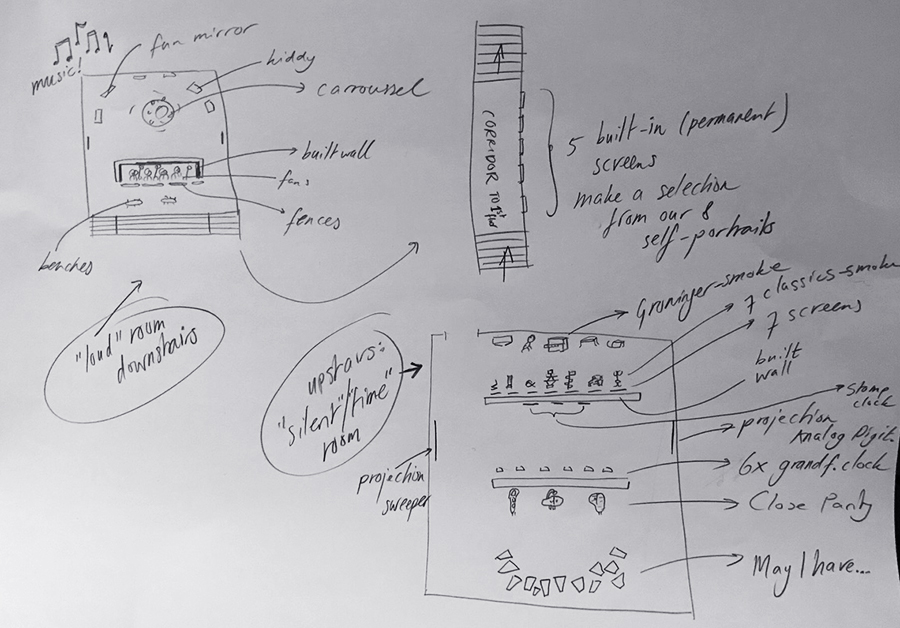 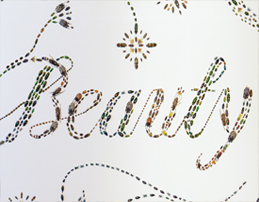 Why did we start to think more about function and less about beauty? and why is the worst thing you can say about beauty is that it is in the eye of the beholder? Taking a look back at Stefan Sagmeister's lecture before the opening of the exhibition "Sagmeister & Walsh: A Retrospective"
Read more 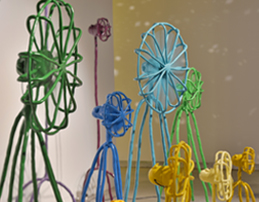 A solo exhibition of the work of Dutch designer Maarten Baas, who is considered one of the most influential young designers of our time. His theatrical, playful, and radical style moves in some of his work between surrealism and primitivism, and zigzags between design and art.
Read more
Powered by ActiveTrail