Materials have their own distinct characteristics. These can be varied, from physical traits to qualitative properties of their feel or expression. If one takes a closer look at the gaps between two differing materials, it becomes apparent that there are no clear-cut distinctions, but rather a gradated space in which their respective characteristic features waver ambiguously. It is this space that forms a platform for new ideas and creativity.

Back to the exhibition main page

The dense and atomic structure of a diamond efficiently disperses strength and light throughout the material, giving diamonds their singular hardness and shine. We designed a “strong but flexible” structure that used this atomic array as a motif, and wanted to devise a chair that would respond to pressure by absorbing rather than resisting it, and had the suppleness of human organs or muscles.  We created such a structure through powder sintering rapid prototyping technology that uses a laser to transform polyamide particles into a hard mold based on 3D CAD data.

The Rapid Prototyping technology (RP) let us add thickness where users need support, and to carve away the material into a thinner, more flexible and responsive thickness in places where users want comfort, allowing one material to serve multiple purposes. There is a limit to the size of an object an RP machine can produce, so we designed the chair in two pieces that snap together like a puzzle, and attached them after each piece had hardened. This not only let us control cost and production time, but also, since the pieces are cast at the same time, eliminated the problem of parts not fitting together exactly during assembly because any shrinkage or distortion due to heat occurs at the same time and the same rate.

We are not planning to mass-produce the chair, but since it only takes five to six days to produce, a manufacturer would not have to worry about keeping it in stock, and overseas orders could be filled by sending data overseas for production on a local RP machine, drastically cutting shipping time and cost. In other words, the diamond chair project showed us that in the near future, we may well solve problems that have long plagued the furniture industry. 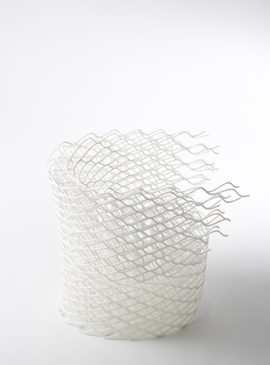 The fadeout chair’s legs seem to gently disappear, as though the chair stands in a pool of mist or fog. The chair’s back and seat are wooden, and the clear acrylic legs are specially painted by craftsmen so that the wood grain appears to gradually fade away. Usually, our perception of furniture is strongly affected by the space around it. The fade-out chair turns this relationship on its head: we can change the look and feel of a space simply by placing the chair in it. This was our attempt to design space itself through furniture.

We cast clear acrylic in a wooden form with a strong grain and assembled the resulting pieces to create a table made of ‘transparent wood’. We reproduced the butt ends faithfully and beveled the edges like floorboards, and matched the grains ends and dimensions of the wood used for the table legs to the ‘transparent wood’ to create a unified piece. The two tables have specific and different optical effects: at first glance the black table is wood, but a closer look reveals its transparency, while the clear table is the transparent at first glance, and only later reveals its wooden form. 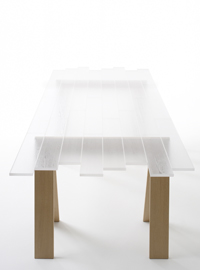 A chair whose surface mixes two different patterns, created by printing woodgrain patterns onto wood with an already distinctive grain. We experimented with different degrees of combination. For some seats we layered two different woodgrain patterns, and for others printed enlarged, abstracted woodgrain patterns onto the existing pattern. For another design, we scanned the wood’s surface then printed the same pattern back onto the wood at another angle. We also experimented with other materials, replacing the seat base with OSB laminate board for one chair and printing a marble pattern onto the wood for another. Thanks to printing technology we could make fine adjustments like the scale, density and colours over and over, bringing out the charm and attraction of natural materials from a variety of angles. 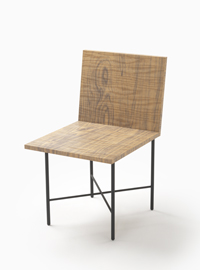 A clear acrylic ruler whose marking fade from white to black, making the ruler easy to use on dark and light surfaces alike. 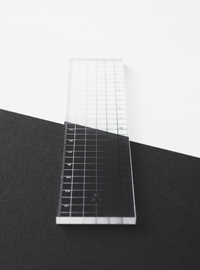 A collection of sunglasses designed for Camper, the Spanish footwear manufacturer headquartered in sunny Mallorca. We created the lens shades by layering two differently-colored lenses which slot into the frame offset from each other, creating a subtle accent through the overlap. The glasses come with three color sets: brown/grey, blue/gradated black and red/ green. Thanks to the outstanding skill of Inui Lens, a specialist sunglass lens maker with over sixty years of history based in Sabae, Fukui Prefecture, the lenses slide together perfectly with no space between for air bubbles. We designed the sunglasses’ case in Camper’s signature soft leather, and used a glasses temple attached by a cord to the case for the closure. The sunglasses come with a cleaning cloth that imitates the shape of the lenses, for a hidden touch of Camper’s characteristic playfulness. 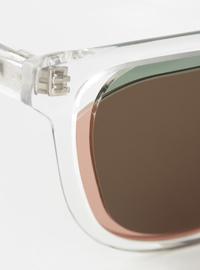 We used a technique called ‘udukuri’ to carve away the soft parts of cypress boards so that the harder curves and lines of the wood grain stand out. Then we covered the boards with paper and traced the relief in colored pencils to transfer the wood grain onto the paper. This created a tantalizing juxtaposition between the familiar proportions of wooden and the finish of the paper, and an inviting fusion of the subtle shades and blur of the colored pencils with the raised wood grain. Ultimately, the project gave us a glimpse of the future of furniture, through the manipulation of surface texture. 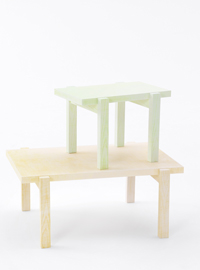 Pieces on display at project exhibition held at the Palazzo Reale adjacent to Milan Duomo’s square, in conjunction with the EXPO Milano 2015. Presided over by Italian material manufacturer Alcantara, the pieces have been selected for their resistance ‘to fraying around the edges even when cut apart from the whole’, much like the trademark material to which the company lends its name. Alcantara of various colors have been layered and rolled up to create a kind of ‘log’, and then cut into slices of lumber to create the effect of ‘Alcantara tree-rings’. 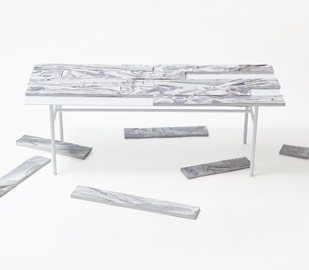 3 types of low tables that are of the shape of a box using 5 sheets of frost glass. For the joint between two sheets of glass, the cross-sections with an angle of 45° were printed with bright colors; these cross-sections were then bonded together. These colors had a gradation effect, such as from purple to red, orange to yellow, and blue to purple. What is more, the reverse side of the frost glass was printed with a pattern to make it look as though the same colors were blurred on the glass surface. With this, we tried to create a natural and soft image, as if the colors on the edges were blurring. By combining the extremely difficult technique of printing gradation colors on the diagonal edges with the printing that expresses a delicate “blurriness”, an appearance that contradicts the conventional image of glass, which is of a hard and sharp material, was achieved. 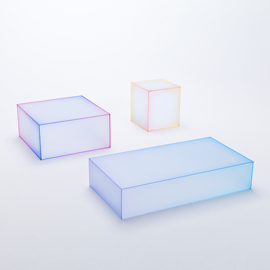 A set of bowls for the KAMA. Sex & Design exhibition at the Triennale Design Museum in Milan. The curators asked eight designers to create an object, in conjunction with an exhibition that explored ideas of eros in design from ancient times to the present, from a cultural anthropology and mythical perspective. We located the intersection of eros and design in the spiritual pleasure provided by an object’s touch, and decided to make an extremely thin bowl out of silicon for our contribution. The bowl resembles a ceramic one, but with a tension to this perception, generated by the extreme thinness that would be impossible to achieve with clay. The bowl changes shape as easily as liquid when it is touched, and continues to quiver momentarily in response to the outside force. We wanted to express eros through a design that invokes desire – a design that viewers simply can’t bear not to touch.

We wound fishing line tightly around all the surfaces of a wooden chair to give it a new luster and fine unevenness. The fishing line was dyed before use, allowing it to function like a kind of varnish, bringing the wood grain to life while adding color. The fishline chair is an exploration into ways of finishing wooden surfaces that go beyond the usual applications. 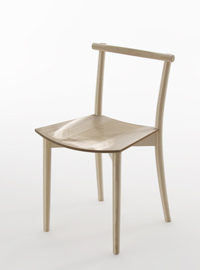 01. between processes
02. between textures
03. between boundaries
04. between the object
05. between relationships
06. between senses
Back to the exhibition main page
Powered by ActiveTrail